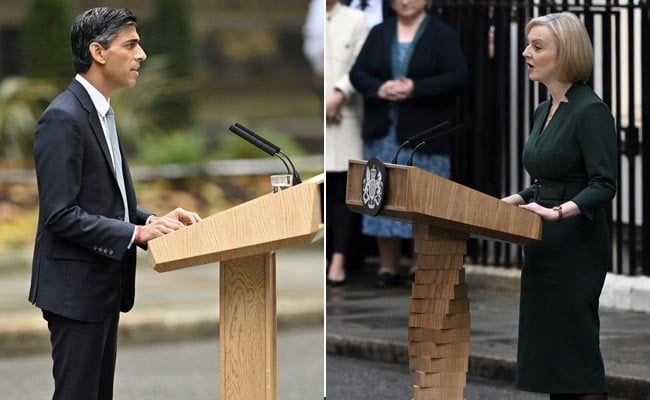 UK prime ministers in recent decades have each had their own personalised lectern. (File)

The lectern’s unusual appearance sparked surprise last month when Truss used it to make her first address in front of the prime minister’s residence at number 10 Downing Street.

British prime ministers in recent decades have each had their own personalised lectern.

But the speed of Sunak’s selection as party leader and prime minister following Liz Truss’s short and calamitous tenure meant Downing Street had to cast around for a stand left over from a previous administration.

The lecterns, which have a metal core to prevent them blowing over, usually take at least three weeks to manufacture at a cost of up to 4,000 pounds ($4,500), according to The Daily Telegraph.

Sources told the newspaper that former premier David Cameron’s lectern had been designed to look “statesmanlike”, while Theresa May’s aimed for a “feminine” look.

Boris Johnson’s had a two-tiered base and was the first to be a dark brown colour.

Although Truss’s unsuccessful spell as prime minister lasted just seven weeks, the daily noted that her lectern had however been “well used”.

Meanwhile as Sunak stepped up to address the country, outside Downing Street demonstrators delivered an amplified musical message.

One of the tunes they chose for the arrival of the “Star Wars” fan Sunak was “The Imperial March”, Darth Vader’s theme.

Another demonstrating was Neil Horan, a serial protester who has previously claimed Brexit figurehead Nigel Farage was “sent by Christ” to save Britain from Europe.

Police questioned Horan as he held up a sign saying: “Britain is a Christian country. It should have a Christian prime minister — not a Hindu one.”

The crowd, notwithstanding its vocal anti-Conservative views, responded to Horan with boos and expletives.

But Larry the Downing Street cat — 11 years into his reign as mouser-in-chief — kept calm and carried on, taking a relaxed morning stroll ahead of the arrival of his fifth prime minister.

Leaders may come and go but Larry, who even has his own satirical Twitter account, is now a feline fixture of British political life.

“His family is loaded, so caviar and lobster on the menu for me from tomorrow,” Larry tweeted, looking ahead to arrival of the fabulously wealthy Sunak.

Larry will have to share Number 10 — and its half-acre garden — with the Sunak family’s 18-month-old pet Labrador, Nova.

(Except for the headline, this story has not been edited by NDTV staff and is published from a syndicated feed.)